Appointed by then Archbishop Barry Hickey to the Gingin- Chittering Parish, Western Australia in 2000, Fr Paul Fox inherited a parish of four centres that between them could only boast of a single Parish Church. With great faith and zeal Fr Paul set about remedying this situation by first renovating the existing church of St Catherine’s in Gingin, which had been closed down due to an infestation of bees and then, with the untiring help of volunteers, building St Anne’s Church in Bindoon. 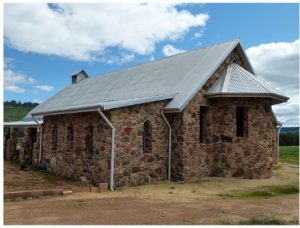 Fr Paul’s thoughts then turned to Lower Chittering. Providentially gifted with a generous parcel of land in a beautiful glade in stunning Lower Chittering at the centre of the envisioned Maryville Development, it was here that the vision of the Divine Mercy Church gradually emerged in Fr Paul’s mind.

During four years of study for the priesthood in Rome, Fr Paul profited regularly from the ancient catholic tradition of “pilgrimage” so widely practiced throughout the centuries in Europe and still so accessible through the innumerable holy sites spread throughout its cities and towns. Desirous to foster this grace-filled tradition in Australia, Fr Paul began to see the enormous potential of the Chittering location as a holy destination of pilgrimage for the faithful of the archdiocese. And what devotion could be closer to the heart of the faithful and more relevant for our difficult times than to dedicate the Shrine to the greatest attribute of God, His unfathomable Divine Mercy as revealed to St Faustina Kowalska of Poland.

After several years of prayer and planning and through the skills of designer Peter Anthes, a wonderful design for the Divine Mercy Church was produced. This was subsequently approved by the Archdiocese and then as if to confirm everything, in 2011 a generous bequest was received, allowing construction of the Church to begin. Through further generous donations, despite some delays in the ensuing years, the essential structure of the church is nearing completion.